Curfew is an eagerly awaited street race drama starring Sean Bean, Billy Zane, and Adrian Lester. By day the world seems very much like the world we know – but at night the shutters come down, the streets are cleared and a curfew is enforced to protect the population from an infectious virus that has decimated the country. Ordinary people are given the opportunity to race their way free and escape the world of the curfew.

REWIND partnered with the Endemol Shine UK Multiplatform team to produce Curfew: Join The Race. The ambition was to create a narrative experience which meshes deeply with the timeline and themes of the show itself, providing an immersive alternative angle on the action. The experience allows fans to step inside the Curfew world they see on screen and get closer to the race. 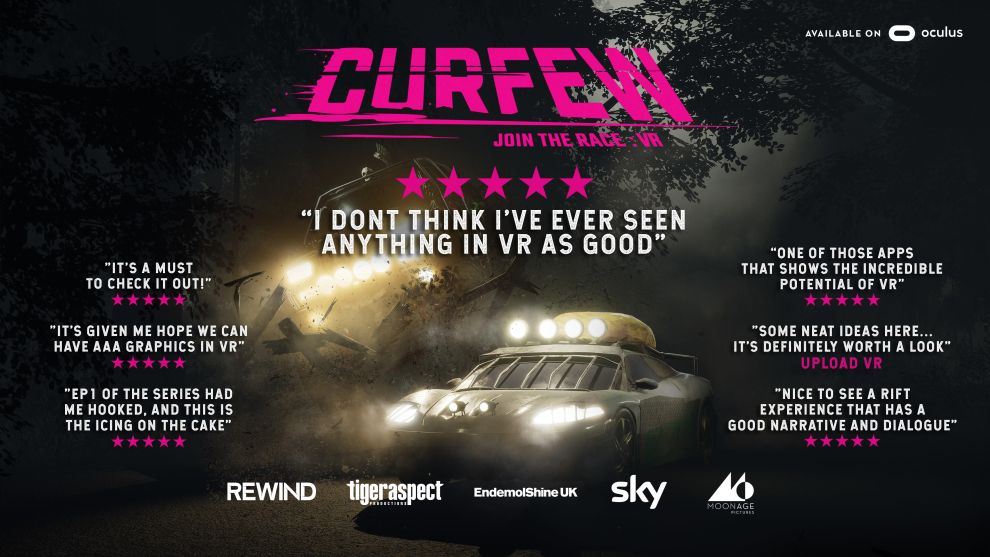 The interactive scripted adventure lands you on the starting grid of an illegal street race inspired by the Curfew universe. You meet your driver, ‘Eduardo’ and the mysterious ‘Helena’ who communicates to you from her hideout over CB radio. As co-pilot, you must make decisions in the hope of evading the police, other racers and surviving the night.

The experience was created using REWIND’s in-house version of Unreal engine along with a set of narrative and interactive tools, purpose-built for making immersive VR experiences. The process involved extensive reference photography, motion capture, immersive sound design, and a notable cast of actors and talent.

Curfew: Join The Race is available to download for free on Oculus Rift.

REWIND has created many blockbuster immersive experiences including Silicon Valley: Inside The Hacker Hostel for HBO, Home - A VR Spacewalk for the BBC, Ghost in the Shell VR for Dreamworks and Paramount.