Men, It’s Time for You to Learn Not to Take a Joke

The discomfort a sexist comment brings must be redirected to the person that deserves it - the one who said it, writes BETC associate creative director Lauren Haberfield

I let women down recently. Not just women in our industry or my coworkers, but women in general. For all my feminist talk and beliefs, I found myself in a situation where an openly and unapologetic sexist comment was made in my presence.
My response wasn’t exactly what I would have expected, after all this wasn’t my first time... I didn’t throw back the perfect witty, intelligent barb, silencing the man who made the comment like an Aaron Sorkin screenplay. Nor did I go on a passionate rant about the impact a comment like that has on the greater spectrum of society. I didn’t even say that I found the comment offensive.
I’m ashamed to say, I did nothing.
Literally nothing. I sat there mute, processing what I had just heard. Don’t get me wrong, I didn’t laugh. I stopped laughing at sexist comments a long time ago. I take no pleasure in the humiliation of women and I’m certainly not going to reward anyone who does. And I didn’t hide my discomfort. But I did allow myself to be silenced by it.
At first I blamed the shock, maybe I’m losing my edge, but I’m used to my sexist comments being a little soft around the sides. They normally go along the lines of “You know I value women but…” or end with “I’m just joking” or a continuation that implies the person the observation was made about actually is much more than the previous condescending remark. But in this situation, there was no attempt at softening it. Not even a fake laugh.
And what’s worse, I’m not even sure the man who made the comment was joking. He deliberately went off topic to share this commonplace sexist statement, even waiting until he had everyone’s attention and giving it a preamble. How entitled do you have to be to purposefully say something that insults half the people present and not even attempt to pretend you know it’s inappropriate?
I couldn’t stop thinking about it. And not just because the comment did offend me as a woman (and a human being) or that I know I let women down by not opposing it. But because he wouldn’t be thinking about it.
Society has conditioned women to make the people around them feel comfortable, at all costs and at their own expense. And while we all like to think that in the workplace we have evolved above this control play, we haven’t. We still let men ‘hepeat’ and take credit for our ideas and handball off their organisational or social tasks and responsibilities to us. We even avoid asking for raises because the situation gets uncomfortable.
So maybe it’s not a surprise that rather than speak up against this sexist comment and make the culprit accountable, I chose to swallow the discomfort myself. But this is something that has to change. 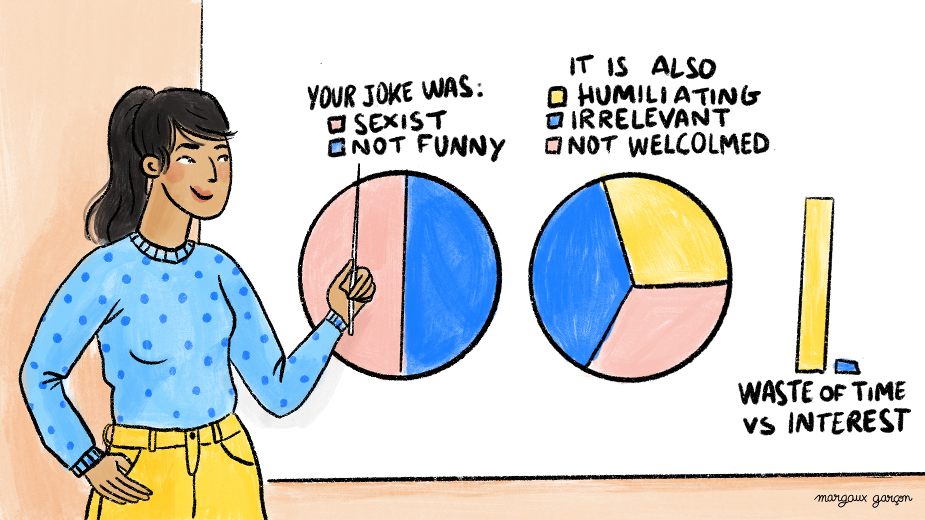 Because even after days of reflection and reading and discussing with other women, I can’t win in that situation. And let's be clear, this situation is happening all the time, both in our personal and professional lives.
If I had made that perfect witty comeback, he might see it as me accepting and therefore approving his comment and engaging in respectful banter. In other words he’d be off the hook. Called out yes, but also mollified.
If I went on a rant, even if I raised relevant points, he would dismiss me as ‘one of those feminists’, while he internally or externally rolled his eyes and ignored every word that came out of my mouth.
If I had insulted my own intelligence and pretended I didn’t understand to force him to repeat it, his belief that men are superior to women would only be affirmed.
If I had taken arguably the most mature path directly saying that I found the comment offensive or that it wasn’t appropriate, he would have immediately responded with “It’s just a joke”, deflecting the discomfort away from what he said to my inability to have a sense of humour. And while there are worse things than being ridiculed for caring about gender equality, the outcome remains the same - multiple women are humiliated so that one man could feel more powerful.
The only way the man responsible would have felt embarrassed or ashamed is if the majority of the people present spoke up. If one after another they condemned the behaviour and especially if the other men called him out. Not only is this easy to do, but chances are people won’t even tease you about it. They will respect your respect towards women and the example you are setting. And this equally applies if the misogynistic remark is made by a woman in the first place.
While I’ve learned from my mistake and will proudly not ‘take a joke’ when I next find myself in that situation, I’m asking the men of our industry to do the same. It’s not enough to be the guy that doesn’t make those comments, you already recognise them when they happen and they probably make you uncomfortable too.
So, to all the men reading this, it is your responsibility to help direct the discomfort a sexist comment brings to the person that deserves it - the one who said it.
To all the women reading this, we’ve got to give ourselves permission to make a situation uncomfortable and as June would say Illegitimi non carborundum.*
It’s time for us all to be proudly offended and to turn “you can’t take a joke” into a compliment.
*Don't let the bastards grind you down