Alex Rozanec on learning the ropes with David Naylor, media as a source of education, and west coast warmth

Alex Rozanec had quite an introduction to the world of film production. While studying English at the University of Toronto he came to realisation that words didn't really do it for him and that his future lie instead in images, namely moving ones. A family connection led him to LA where he spent his formative years in production shadowing his cousin, an EP with DNA / Artists and Derelicts, her production partner Anna Golin - the daughter of the late Steve Golin, founder of Anonymous Content - and David Naylor, the founder of DNA / Artists and Derelicts. It turned out that David produced a whole bunch of music videos that Alex obsessively watched as a kid in the early noughties.
He's since left LA for Toronto, where he is bringing west coast warmth to the city with TrePalm, the production company he founded to produce for and represent the next generation of storytellers.
LBB's Addison Capper picked his brains.
LBB> At 25 years old, you are relatively young to be running your own production company! Tell us about your experiences before setting up Trepalm. How did you get into filmmaking?
Alex> Filmmaking was the only thing I really wanted to do. I was an English student at the University of Toronto with an ill-defined path and I had a thought to reach out to my cousin Olanna Taskey who was EPing projects under DNA/Artists & Derelicts in 2016. So I went to LA with no job prospects but I took a chance and before I knew it, I was involved in a number of music videos and commercial spots. I met her producing partner Anna Golin, daughter of celebrated producer and Anonymous Content founder Steve Golin. For close to two years I shadowed Olanna, Anna, and DNA/AND founder David Naylor, who produced videos for Don Henley, Madonna, Lady Gaga, Drake, Jennifer Lopez, Nelly Furtado, Justin Timberlake, Joni Mitchell, 50 Cent, Skrillex... I could go on. For that experience, I am so grateful. I could not have asked for better teachers when it came to production.
LBB> On the Trepalm website you say you have an obsession with cinema and music - where do those obsessions come from?
Alex> I watched a ton of movies on satellite TV before I could go to the theatre on my own. Music is in my bloodline. My ancestors from Ukraine and Poland were musically involved one way or another, but the turning point was when I turned nine, my parents gave me my own computer in my room - that was a big thing for any kid in the early 2000s. During that time music videos began to spread to the internet, and I remember watching the videos of popular artists at the time, namely No Doubt, Jimmy Eat World, Sheryl Crow, Avril Lavigne, P!NK, Black Eyed Peas, Nickelback. On the screen, I saw music and cinema combined into a much shorter format and this was a revelation for me - I perceived music videos as little movies put to song. Little did I know that my mentor David Naylor produced nearly half of the music videos I watched as a kid.
LBB> What inspired you to launch your own company?
Alex> I think the idea came from when I used to put playlists together for my friends in elementary school, and when I got a taste of what was going on in LA, I thought 'this is what I want to do'. It’s assuming the role of the ‘provider’, the service person, that satisfied me.
LBB> What are the ideals and ethos that you founded the company on?
Alex> At TrePalm, we aim to capture the essence of the brand. For us the key to a great spot is substance. In addition to having a great eye for style and beauty, our directors have a keen sense of branding, and I wanted to emulate DNA’s dedication to their clients. DNA always put the brand ahead of them, they cared for their clients, and that’s part of the reason why they rose to the Mount Rushmore of music video production companies. Under the guise of the palm tree, I wanted to bring that west coast energy and warmth to clients on the east coast.
LBB> I'm a sucker for a palm tree - tell me about the name and logo inspiration?
Alex> I’ve always had a thing for the tropics. However, it was more about the lifestyle, vibe and spirit than aesthetics alone. Before I came up with a name, logo, and general idea, I was scrolling through my camera phone for inspiration and I remember taking a shot of three palm trees outside an Airbnb while I was on vacation in Beverly Hills, and then I said, 'yep, that’s it'. Everything else fell into place. 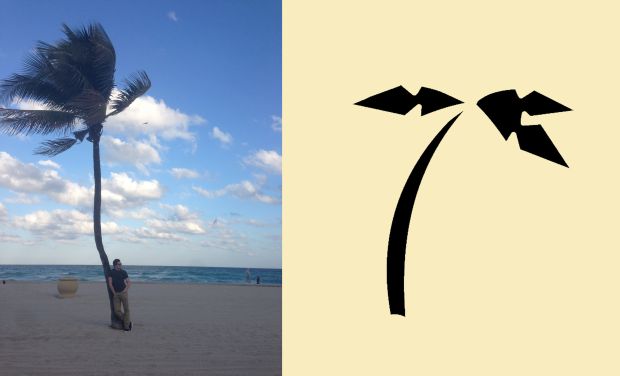 LBB> You were based in LA for a while but recently moved back to Toronto - what differences and similarities do you see between the production industries of the cities? LA is such a behemoth when it comes to that industry!
Alex> From my time in LA to setting up shop in Toronto, the differences are few, other than LA has a greater output of music videos. With an already burgeoning music scene, Toronto is becoming a breeding ground for great filmmakers. I’ve been fortunate to have worked with directors, DOPs, grips and electrics, editors and producers who can make some serious magic happen in front and behind the camera.
LBB> "TrePalm’s mission is a threefold operation: Educate, Entertain, and Escape." Please elaborate!
Alex> ‘Entertain’ is the flash and pizazz, but ‘escape’ and ‘educate’ have some depth. ‘Escape’ means inviting you to another realm in which the stories our videos and spots create. That’s why we go to the movies and spend our time binge-watching. The ‘educate’ part stems from my time watching an inordinate amount of television as a kid. I’m a big believer in media as a source of learning. I learned about what made me happy or sad and where my true interests lay. Given the right media sources, you can learn a lot about the world and about yourself as an individual. Media can be a useful tool if you know how to use it and how to interpret it.
LBB> What makes TrePalm unique within the Canadian market?
Alex> I think one aspect that separates us from other companies in the Canadian market is our roster. Our directors are young and were raised in the 2000s era of music videos, like I was, and from the era of social media, so they know the platform and the people who spend their time online. Being 'young' in the industry might be synonymous with being 'inexperienced', but that’s not the case with us. These directors can guide a client creatively and tailor their work to the consumers of today. Even though the audience is changing, our directors are adaptable.
LBB> You're a producer but do you have any ambitions to direct at all?
Alex> I started out directing zero budget shorts and music videos before I forayed into producing full-time. My problem is I could never sit still in the director’s chair so I gave it up for a bit. Maybe I’ll give it another try in the future.
LBB> The music video scene is a thriving area of filmmaking, after a few years in the wilderness. What do you think is pushing that trend?
Alex> Music videos are a great launching pad for filmmakers, and I think it has to do with taking concepts, making sense of movement, framing, the right light, story structure and, most importantly, developing a visual palette. Directors David Fincher, Spike Jonze and Francis Lawrence are three great examples of filmmakers who got their start as music video directors and who have gone on to direct modern masterpieces. In a manner of speaking, music videos are a school for experimentation. Cinema is a labour of love and music videos can be an uninhibited form of expression.
LBB> What have been some of your most memorable experiences since launching?
Alex> I’ve had a lot of great times on set, but the best time might have been when we shot a video at my grandparents’ place and they cooked a whole meal and brought craft over for the cast and crew - even though we had meals and craft in the budget. That’s what you get when you come from a Ukrainian household: nobody leaves the house hungry.
LBB> What did you have in mind when initially building your roster?
Alex> I wanted to be able to work with directors who can find their niche and easily translate their vision onto the screen. Character is one thing but to be able to convey one’s vision is an incredibly huge asset, and that’s what I look for. It’s easy to work with directors who can clearly communicate their ideas and who can grasp the client’s vision. I love working with the directors on the TrePalm roster because of their work ethic and the eagerness to tell stories with substance - they put a lot of themselves within their films.
LBB> And what do you look for when signing new directors, especially with regards to focusing on upcoming talent?
Alex> Hard workers, and the ability to overcome the challenge of two important facets: channelling your own creativity and delivering to the client.

LBB> Which recent projects are you particularly proud of and why?
Alex> I’m definitely proud of the spot we produced for Kombat Arts, which won a CSC award. It was our first big project as a company. This year, we did some spots that Chris Di Staulo directed for the University of Windsor where we tried to showcase the school and its education programme from the perspective of the students. We also had a hand in the Aiwake music video directed by Andrew Hamilton, which was a one- take. That one was rehearsed several times throughout the day, and, after six or seven five-/six-minute takes, the shoot wrapped around 3am. Good times.
LBB> Where do you see TrePalm in five years? What’s your ultimate vision?
Alex> We’re hoping to do more music videos and branded content, but we’d also like to tap into long-form and do some narrative work. I also want to invest time and my own brainpower to build a production house that creates long-lasting content. Hopefully one day TrePalm can become a source of inspiration for future generations of filmmakers in short and long form content, to match the energy brought on by household names such as DNA, Anonymous Content, Propaganda Films, or PRETTYBIRD.