There’s more to the best of British advertising than trying to flog you rubbish, writes LBB’s Alex Reeves – in association with the APA

Advertising is trying to sell you stuff. But in the process, it often has something meaningful to say. The UK’s best advertising this month has a load insights about humanity, if you care too look for them. Here’s the work that most resonated with me.

Droga5 London keeps up its winning streak with its insightful campaign for Amazon Prime Video by taking the strong idea it’s been running with and perfectly applying it to the outdoor media format. It’s rare that you’ll see this level of art direction craft on a poster or billboard. At a glance, you get the point. But look at the detail. Keep looking. There’s so much storytelling going on in these photographs, accompanied by just one line of copy and a small clue in the right hand corner as to what show is inspiring the scene. It’s the sort of advertising I’ll move down the Tube platform to spend a couple of minutes looking at (probably before going home to watch something on Amazon).

I can understand why people in the ad industry have sneered at this a bit. Where’s the craft!? It’s just advertising people acknowledging the fact that everyone hates advertising. But there are a couple of reasons I can’t agree. Firstly, that is the sort of ‘I could’ve done that’ argument that people who don’t like modern or contemporary art make and I’ve always found those people boring. Secondly, whether you think it’s good or not, it has your attention as soon as Meshuggah’s abrasive riffs invade your living room like a band of plunder-thirsty Vikings. And then there’s a more personal reason why I like it. I like metal. And I’m so glad the team at Uncommon agree that it has its place in advertising. If you don’t know Swedish riff-smiths Meshuggah then give them a try. They were probably the single most important inspiration for the emergence of the ‘djent’ subgenre of technical, syncopated heavy metal. I’m glad they’re getting paid.

SEAT and CALM - Grow a Pair 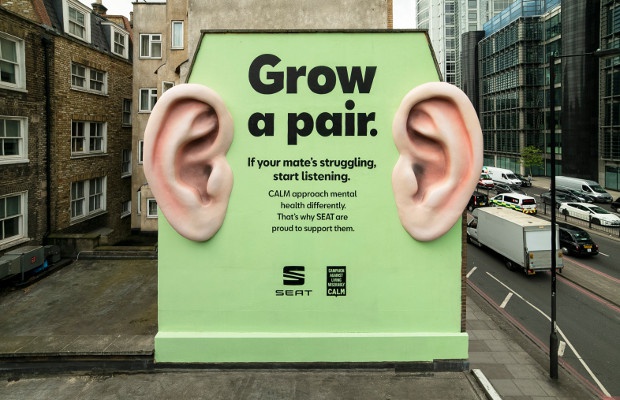 Mental Health Awareness Week has become another one of those events that every brand and their dog feels that they have to say something about to prove that they’re not the amoral capitalist profit engines the majority of them are. So there was a significant sample of facile posturing that left me feeling relatively unmoved. But whatever you think of SEAT jumping on the cause of better mental health, CALM are an important part of driving the change that men desperately need in order to improve the terrifying statistics about male suicide. And this idea from adam&eveDDB says it all really. I don’t need to explain why it’s good. Just look at it and tell me that you don’t have a problem with traditional masculinity and the pressures it heaps on me.

Warburtons’ previous star-studded adverts were all blockbusters in my opinion - The Deliverers featuring Sylvester Stallone, The Giant Crumpet Show featuring the Muppets and Pride and Breadjudice featuring Peter Kay - undoubtedly expensive, ambitious TV commercials, but all were executed with flair. And amazingly, ENGINE and director Declan Lowney have kept up their reputation in this collaboration with Robert DeNiro. An expertly observed parody of the mobster film set in the drizzly English North West. It’s exactly the sort of ad you want to watch at the cinema.

Zalando - Dress for Yourself, Nobody Else

In its own way, this joyful explosion of colour and awkwardness is doing its bit for people’s mental health. OK. That’s a stretch. But it’s definitely doing an admirable job to show us how happy we all could be if we just stopped letting society dictate our wardrobes to us. Other than that, I love it because it’s fun to watch two models who have probably featured in the most po-faced, pretentious designer ads let their silliest dance moves out of the box.

Brand Insight: How HP Is Getting Real for the Holidays