The APA’s working group has developed a national campaign for the charity due the roll out in the UK once it raises £18,000 in funds

The UK’s Advertising Producers Association is calling on the ad industry to help the young homeless. The APA urgently needs to raise £18,000.
People in London are confronted on a daily basis with the unbearable plight of homeless young people living in appalling conditions. The impotence most of us feel when confronted with this problem is what inspired the APA, as a sponsor of End Youth Homelessness (EYH), to try and do something to help.
Alongside a working group drawn from the ad industry that includes Little Black Book, the APA has developed a national campaign about to roll out in major cities across the UK to raise awareness of the EYH brand with the aim to pull in serious cash and corporate sponsorship.
Unfortunately the association is desperately short of cash to fund this national roll out - critically so.
Everyone involved in the project is donating their services for nothing but the impending national road show (see below) involves some unavoidable hard costs and it is these costs that the APA is desperate to finance.
Currently, homeless 16-25 year olds outnumber the population of Bath. With EYH, early intervention is a proven solution. Please give generously; collectively, we really can change young lives beyond recognition. 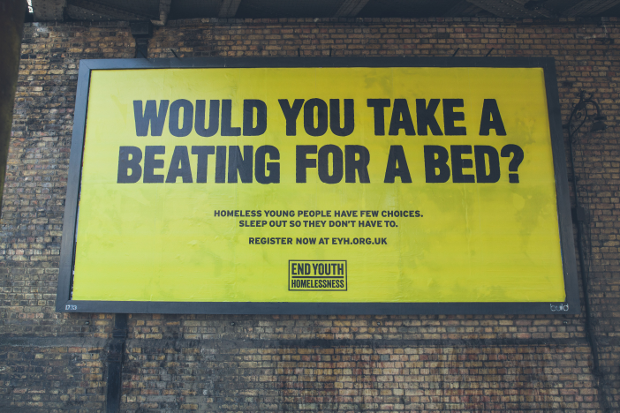 Thousands of young homeless people are on the street and a greater number manage to temporarily avoid the street by sofa-surfing until goodwill expires, become night bus riders or even self harm to get a hospital bed.
Those on the street feel completely overlooked, unseen. The remainder are truly invisible to us - we naturally do not recognise them as homeless.
And so, the strategy distilled down to one word became ‘Invisibility’.
From this single thought, the idea of creating invisible figures was developed and artists approached.
David Oliveira, whose wire sculptures not only describe 'Invisibility' but are arresting in their own right, kindly volunteered to make a series of life-size figures.
These sculptures will be placed in the most public of spaces with the greatest footfall, for example, main train station concourses and major shopping complexes across the UK.
The objective is to provoke the viewer into engaging with these figures and their message '#NowYouSeeMe' making the invisible suddenly visible and to learn more about the plight of young homeless people and EYH and its work.
Additionally, a campaign is being built around the figures that will maximise media attention.
If the campaign is fortunate enough to gather funds greater than that required for hard costs, this money will of course go directly to EYH, towards the great work they are already achieving.
If you would like to make a donation then please click below for the Just Giving page and share it across your company's social platforms, along with '#NowYouSeeMe' to spread the word.
Please donate here.