Duncan Channon's TV spots were born from unscripted conversations with three real people, and brought to life through animation by Robertino Zambrano in collaboration with Nexus Studios

With Covid-19 causing record numbers of people to attempt to quit smoking or vaping, the California Department of Public Health’s CA Tobacco Control Program is launching a new animated TV campaign that normalises the reality that failing is part of the quitting journey, and encourages people to get help. The new work is particularly relevant in light of research that has shown that smoking doubles the risk of getting seriously ill from Covid-19 - and a surge in people trying to quit.
Created by Duncan Channon and directed and animated by Robertino Zambrano with Nexus Studios, the ‘Tell Your Story’ campaign takes a distinctive creative approach relative to decades of work that attempts to scare smokers straight by emphasising the life-threatening risks of smoking. In contrast to work that implicitly shames smokers for betting against their own health, Duncan Channon and CTCP are taking an empathetic approach that shows compassion for the reality that smokers and vapers nearly never succeed in quitting on the first try, or even the tenth.
“Our approach is all about reframing failed quit attempts as necessary forward progress in a smoker's and vaper's journey to quit nicotine for good,” said Anne Elisco-Lemme, executive creative director, Duncan Channon. “Smokers and vapers often feel a sense of defeat when their quit attempt fails, but it's like building a muscle. Eventually, you get to where you want to be. This campaign is about normalising that repeat process in an empathetic way.” 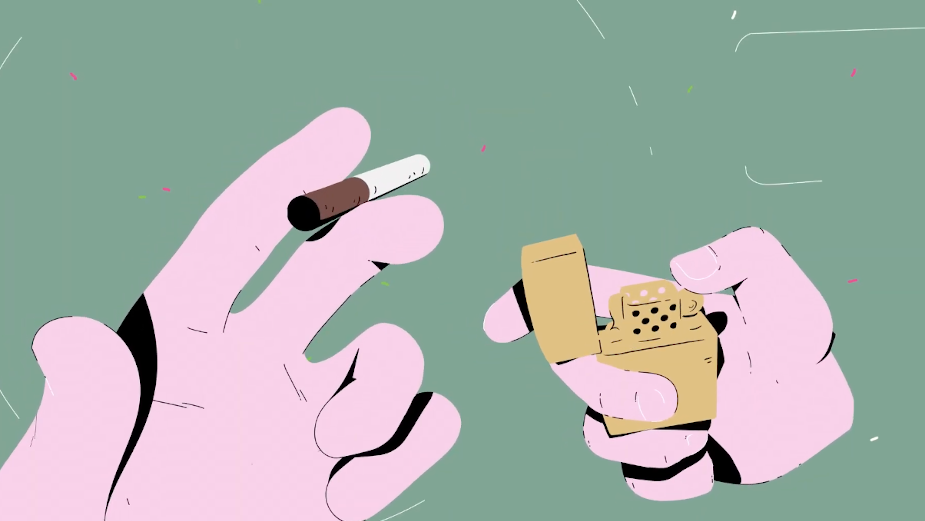 Led by a Duncan Channon creative team that includes former smokers, the agency spoke to more than 100 smokers and vapers about their unique stories of quitting - and failing along the way. The TV spots were born from 100% unscripted conversations with three real people - Steve, Ryan and George - and brought to life through animation by Robertino Zambrano in collaboration with Nexus Studios. The animation style is unique to each person, and reflects the details of their personal expression. The stories bring raw authenticity to the campaign’s message to smokers that ‘every attempt is part of your story to quit for good.’
“I was attracted to this work because of its commitment to evocative storytelling. This wasn’t a simple animation piece, there was a documentary layer to it,” said director Robertino Zambrano. “We met, interviewed and got to know people from different walks of life with unique journeys of quitting. I revelled in the opportunity to present their journeys and voices in a creative, yet authentic way.”
The first spot brings the viewer into a conversation with Steve, a menthol smoker who laughs as he recounts the ‘rules’ he invented - and broke - as he tried to quit.
Another tells the story of Ryan, a non-binary vaper who only found real strength to climb the mountain of quitting after seeing their little sister take up a vaping habit.
The third film invites the audience to hear from George, an older smoker who recounts a moment when his confidence in his ability to quit dropped to new lows after 100 attempts to quit.
'Tell Your Story' is the latest work by Duncan Channon for CTCP as part of a multi-year effort to prevent or reduce tobacco use, including e-cigarettes. The campaign will also include radio spots built around these personal stories, as well as digital and social creative that calls audiences to ‘Quit for Covid.’ CTCP will launch additional radio spots in late January that focus on the real stories of smokers and vapers quitting now because of Covid-19. Duncan Channon’s media strategy is designed to reach two audiences: smokers, who tend to be older and dealing with high stress levels; and, vapers, who are mostly younger and just starting to think about quitting. CTCP’s CA Smokers Helpline has been receiving a surge in calls from younger vapers looking for support in quitting.
“It was important to us to unearth experiences of people most targeted by the tobacco industry, including the African American / Black community with menthol cigarettes, LGBTQ community with false messages of support, as well as older white men who were fed decades of imagery associating smoking with masculinity and success. We hope these personal stories will encourage people trying to quit during the pandemic - they aren’t alone in their struggle, and help is available.”
The campaign features culturally relevant in-language animated creative in Spanish, Chinese, Korean and Vietnamese created in collaboration with multicultural agency partners Acento and APartnership - who also developed media strategies to reach specific cultural audiences. All spots drive viewers to get help to quit at NoButts.org or by calling the CA Smokers Helpline (1-800-No-Butts).