The Mill+ digital artist and director on ‘conceptual net cyber art’, the moment he first saw the beauty of code and why he's the 'Cambridge Analytica of art'

Simply known as @webb on Instagram and the proud owner of the URL webb.site, Thomas Webb was born (and conveniently named) to live on the internet. An artist and director who recently found representation as part of the Mill+ team of creators, his work is often made using code, but frequently has a grounding in the tangible world in the form of interactive experiences, holographic installations or fashion films.
His work intersects with themes of contemporary culture, online communities and the effects of social media. He frequently sets out to disrupt the art, fashion and experiential worlds his work inhabits through his unique brand of chaotic science. He also makes some of the best Instagram face filters in the game. Having been inspired and wowed by his recent exhibition at The Mill in London, LBB’s Alex Reeves caught up with Thomas for a deeper insight into his multimedia creativity. 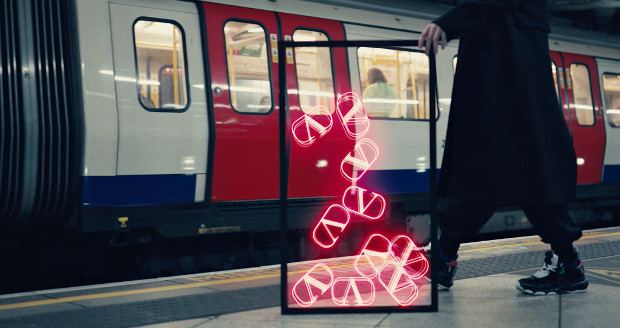 LBB> Can you tell us about your upbringing? You come from a family of video games obsessives, right?
Thomas> My dad was a video game programmer as a kid, so I had a computer from a very early age, plus all the games consoles. I was coding MS Visual Basic way before I had a girlfriend. I spent most of my time making things, electronics, programming or just trying to hack my way around school networks so that I could be free from restrictions.
LBB> What games, cinema, art etc. has most informed your aesthetic?
Thomas> I always think that's a question that requires the artist to define the influences that have led them to their present aesthetic. Too many to count and all too important to not name them all. I forget so much that I consume, taking only from it the parts that inspire me.
Kim Jones said if inspiration can come from anywhere then I want to go everywhere. 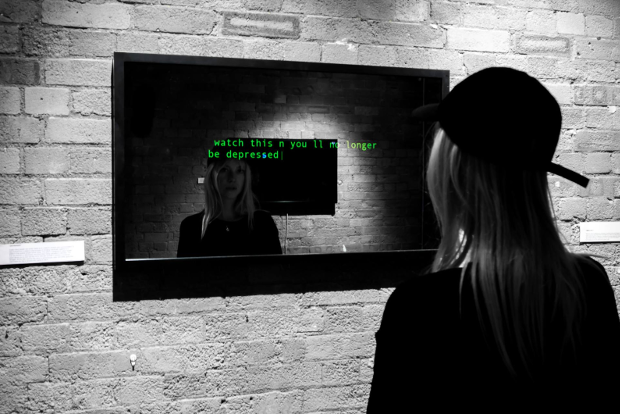 LBB> How did you learn to code / hack? And when did it start changing your life?
Thomas> I was learning the social engineering tricks, hacking people and systems at school when I was 13 or 14, but only really started to code when I was 23. I watched youtube tutorials about making top-down shooter games after being inspired by the indie game Hotline Miami. I kept adding to my tutorials, using code from other tutorials and slowly producing the game into a bigger and more polished app. Six months later my little racing game I made in my bedroom got voted into early-access on Steam Greenlight, and that's when I knew I had a talent for coding.
LBB> When did you start identifying what you did as art? And why?
Thomas> It was a really crazy situation to be in. I got asked to program some art using a high-power projector onto beautiful concrete. I made an infinitely random clock, entitled ‘Rainfall’. I looked at it and thought, “Wow, that's a great piece of art.” I think that's really the answer, I saw the beauty of code that day. How you can make endless programs that have deterministic randomness. It's art because I say it's art, I believe in the ideas and the concepts of what it represents!

LBB> What are your thoughts on how much of the technology around us people actually understand? And the effect that has on society?
Thomas> You've heard me rant about this clearly. I don't think people realise what most programmers are like. All these apps and programs we're using every day are doing a vast amount of behind-the-scenes calculation. You could easily find yourself in a state of quiet panic if you could see the amount of data, not in quantity, but density, that the 'owners' of these apps have.
People often aren’t aware of what kind of things programmers make in their spare time, because with all that data to use, well that’s how you get Brexit, Trump...
I try to use the same mentality but not for political gain, for artistic expression. The Cambridge Analytica of the art world, haha.
LBB> You've called what you do "art built from code, but not in a stupid way." Is there a certain approach to digital art that annoys you then?
Thomas> I don't like 'conceptual net-cyber art'. The kind of art that's screaming about technology or social media by playing a video or through paintings about social media addiction. I understand its place, I respect it. I just don't like it.
I don't like it because I'm a perfectionist and to me using a dated medium or movement to describe the impact of technology is archaic. The questions we must ask about the future of social media, its impact on human psychology and the future of a free internet can only be asked by the internet and social media. Not by a bunch of words on a wall.
LBB> Can you explain what a 'digital infinity mirror is' in easy-to-understand terms?
Thomas> A light source inside a series of mirrors, trapped due to the varied transmission of light between the panes. This repeats the light into infinity.
However, the digital infinity mirror uses an LED system; it creates a moving infinity effect which brings the digital artwork into three dimensions. You can move around the work and watch the perspective of light shift but also move the content of the work. I tend to use neon as it translates best when moving. 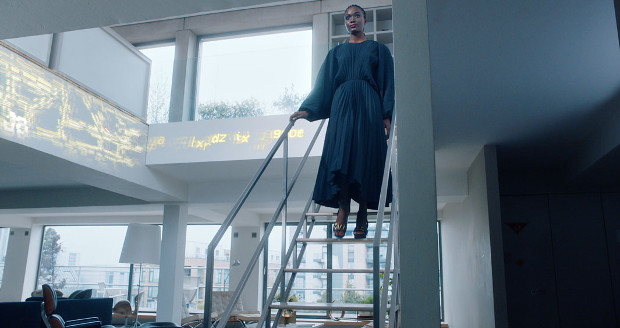 LBB> Why did you decide the Mill+ was a good company for you to collaborate with?
Thomas> They're the best right?
LBB> What excites you most about that collaboration?
Thomas> I think scale. Having The Mill behind me changes everything. I build, fabricate, code and create everything myself, by hand. For the first time I have a building of specialists who can take that load off my hands. This allows me to think more about the context of my work, the reason for it and how best it can communicate the message instead of being consumed by the physical construction of the work itself.
LBB> How would you characterise your relationship with social media? Your work seems to criticise it a lot, but you're also really good at using it to promote what you do.
Thomas> I hate social media. I love social media.
Instagram is the most powerful and dangerous tool on the planet. It’s opened so many doors that I’ve jumped out of blindly. It’s a hype machine.
LBB> Your work is often fed by data and feeds appearing real-time online. So in a sense you are co-creating your works with the internet. How do you feel about the line between making your own artistic point and giving a canvas to the internet and society at large to complete the work?
Thomas> It's objective. Entirely. I am only showing a small snippet of the internet, unaffected or manipulated by me. However, just by highlighting that this data exists, I create a subjective opinion in your head. For that reason, I love that my work is never finished, it will always attempt to show the present moment, through my lens. If I am showing you, then it's my opinion. Despite the data being entirely objective and free from my curation.

LBB> What technology are you most enjoying playing with at the moment?
Thomas> I’ve just started doing machine learning on people using visual recognition. I love how I can use visual recognition to determine what and who someone is. Just from knowing someone’s age and gender you can immediately assume so much about the cultural experiences that they’ve had in their life.
That and Instagram filters. I have launched a few now and it’s insane how much attention they get. I am really working hard on making augmented artworks that people can experience through their device.
LBB> Your art might not seem all that applicable to brand clients at first. But I think it could be really exciting for them. Valentino got that when they commissioned you! Why do you think brands should consider working with creative talent like yourself?
Thomas> I'm 27. I've been making art for a year. I'm literally just getting started. I think that excites a lot of people.
I always deliver. I seem to be getting a name for myself as someone who hacks together projects from start to delivery in a matter of weeks. I think a lot of brands want that.
Also integrity. I won’t make work that I don’t believe in, that I don’t think makes sense. If my name is on it, it has to be innovative.