Kia Motors has teamed up with Innocean, Sydney/Seoul-based production company Calltime, and production service company Flatpack for a cinematic follow-up to last year’s epic UEFA Europa League partnership. In a continuation of 2018’s tribute to Europe’s dedicated football fans, the new spot captures commitment to the sport in a number of locations and a variety of manners.
The film is a sprawling celebration of football’s dedicated fans, capturing the fanaticism of those in love with the beautiful game. An older man is shown surrounded by a whole host of his team’s memorabilia, contrasting with the image of a baby holding his first ever football. A dedicated family (dog included) has their portrait taken in their team’s shirt and scarves while football stickers and graffiti cover the streets. Fans are seen entering the stadium, gathering in the pub, and running into each other on the road. The spot finishes in a stadium during a football match, as fans watch with bated breath, kiss their badges, and cheer on their team. The numerous locations – ranging from a secluded 1900s housing estate, a barbershop, and sports stadium – provided different characteristics for the spot, combining a cinematic style with still-like moments that build tension before the climactic scene.
Director Kyu Ha Kim reunited with Flatpack for the shoot, specifically requesting art director Tünde Csáki. Tünde, celebrated for her cinematic eye, faced meticulous client demands with a clear understanding of the shoot requirements. For the family photo scene, for example, she sourced hand-picked objects from sports museums and vintage stores to enhance the authenticity of the spot’s visuals.
Production service company Flatpack returned for the second year running, with director Kyu Ha Kim and Innocean specifically requesting the crew’s expertise, having previous experience with the high-profile services on offer. The film, shot entirely in Budapest, features locations including the recently rebuilt football stadium Illovszky Rudolf Stadion. The atmospheric alley scenes were shot near a secluded housing estate from the early 1900s. Flackpack met several challenges on the shoot with expert on-the-spot solutions, most notably as this summer saw 70% of Budapest municipalities halt the issuing of film permits to reduce the number of film crews and parking restrictions in the neighbourhoods. Shooting was thus incredibly restricted, with the crew unable to park vehicles or shoot car scenes with a full block. With little space available on the pavements, the team relied on more mobile alternatives such as handheld and steady cameras, unable to set up a base for the shoot or use lights, stands, or frames. 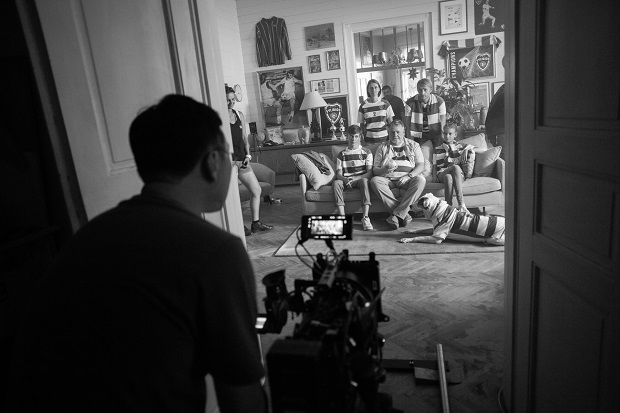 Behind the scenes on shoot
Flatpack Owner and executive producer Zita Kisgergely said: “It was a pleasure working on the new Kia UEFA film and building on our partnerships from last year’s campaign. Our key considerations were maintaining strict attention to detail and staying true to the creative vision, despite the numerous external production challenges. We used our insider knowledge of the area to provide a number of prime locations that offered solutions to the filming issues, whether this was finding appropriate spaces for the latest Kia models to drive, to operating the Russian Arm with limited space on the shoot.”
Speaking of specific issues, she notes: “The creative team fell in love with the area around the barbershop, yet restrictions meant we could not obtain a permit. We thus shot the scene from the car lane, through a window and into the shop, with all equipment made as mobile as possible for easy transportation. Director of Photography, In Chun Byun, was extremely flexible in the face of this challenge, shooting the scene with a handheld camera whilst maintaining a sleek style.”
“Furthermore, this year saw Budapest’s local football teams perform better than in previous years and, at the last minute, one team booked our intended stadium just before we signed the contract to shoot there. Fortunately, the government is dedicated to building a number of sporting facilities in the area and provided us with the brand new Illovszky Rudolf Stadium – it was the perfect fit for the shoot and the team loved it.” 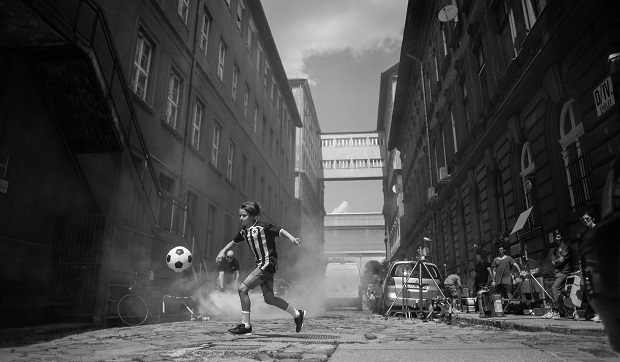 Behind the scenes on shoot

Director of Photography: In Chun Byun