The creative by Publicis Groupe, features Katy telling it like it is in a refreshing, authentic way 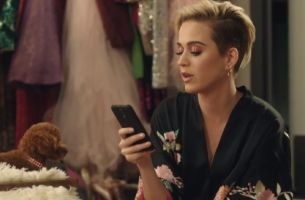 Last year, Citi launched a new campaign for the Double Cash credit card to reinforce the card’s cash back offering: 1% unlimited on purchases and another 1% as cardmembers' pay for those purchases. Through humorous TV spots and digital creative highlighting the disparity between what people say and what they actually mean through every day scenarios like dating etc., the campaign positioned Citi Double Cash as a card that is straightforward, and means what it says.
The campaign was so well received by consumers (in the first three months, product awareness increased 2.3X) and the industry (it just won a 2017 Effie Award), that Citi is about to launch the next iteration of this campaign starring Katy Perry. The first spot, launching on May 8th, will feature Katy in rehearsal for an upcoming show in which she asks her creative director, “Are those the pyrotechnics that are going to startle me from a distance”, to which he responds “Yup.” She continues, “And my impractical wardrobe changes, those all set?” He responds, “Not even close.”
“I'm all about not mincing my words, so I'm excited to be teaming up with Citi for this hilarious new campaign! I'm super pleased Nugget finally gets to be on TV too!", said Katy Perry.
The TV spots will be appearing across an array of networks including ESPN, USA, E!, Discovery, Lifetime, HGTV, FX, and AMC during such widely consumed programming such as The Bachelorette, Dancing with the Stars, Billboard Music Awards etc.
“Today, consumers have a heightened desire for a more emotional, authentic dialogue with brands. Through the Double Cash campaign, we’re striving for that dialogue with consumers through humour and relatable situations that highlight the common disparity between what people say and what they mean,” said Jennifer Breithaupt, Global Consumer Chief Marketing Officer, Citi. “For the next series in the campaign, Katy was the ideal choice as she herself is so refreshingly authentic, which is precisely what we’re trying to convey with the Citi Double Cash Card.”
With global media agency partner, Publicis Groupe, we’ll continue to launch new creative spots during May, including one later this month featuring her dog, Nugget.