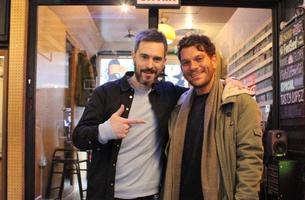 In a celebration of a bromance that has been in bloom for many years Adelphoi’s resident crate digger and regular contributor to Radio LBB, Jonathan Watts will be joining Jeremy Newton on the airwaves from here on in as a co-host on the monthly Adelphoi Show.

The show is a monthly two-hour segment on Soho Radio, featuring an eclectic mix of the best sounds, music led conversation and special guests from across the advertising and music industry, including; music legend Tony Allen, award-winning director Daniel Kleinman, BBH’s Nick Gill and bass music connoisseur Don Letts, to name but a few.

Jeremy or 'Uncle Vibes' as his musical alter ego is known, is a DJ, promoter and radio host who has played regularly at venues such as Ronnie Scott's and The Jazz Cafe as well as festivals including Secret Garden Party, Shambala and Boomtown. He has been hosting the Adelphoi Show on Soho Radio since it first came on air in 2016 and promotes various parties rooted in the groove at some lovely London establishments.

Jonathan has been in the game since frequenting various fields in and around the M25 in the afterglow of the Summer of Love, an experience which had a profound effect on his cultural and musical sensibilities. He has previously hosted a radio show on Ministry Of Sound alongside Young Turk's artist SBTRKT. As a DJ (in a previous life) Jonathan played at venues up and down the country gracing lineups alongside Bugz In The Attic, Norman Jay and The Herbaliser.

Coined by some as the 'Hoddle & Waddle' of online radio Jeremy and Jonathan will be flying the Adelphoi flag on Soho Radio, every third Tuesday of each month!

This month, tune into Soho Radio on Tuesday 19th February from 14:00 - 16:00 GMT to hear Jeremy and Jonathan wax lyrical and celebrate the late, great J Dilla in and amongst a host of other musical merriment.

And to mark Valentine's Day this week, Adelphoi's Jeremy Newton has duly selected some Rare Groove, Soul, Hip Hop, Lovers Rock, R&B and even some Jungle tracks to get you in the mood!