How Gramercy Park Re-built The Louvre in CG

Gramercy Park Studios have created an innovative video installation for The Louvre.

His latest work required re-building two of the museum’s rooms whilst making an almost impossible camera movement – from Steadicam to photo-real CGI – that appears completely seamless.

The Gramercy Park team developed their own bespoke software in order to successfully complete this task, which required extreme levels of attention to detail.

The project takes the viewer through one of the most beautiful interiors in the world with specific camera movements that are tailored to explore these realistic environments in a way that the human eye simply cannot usually experience. The installation is a combination of live action footage and CGI imagery, with the film transitioning from Steadicam footage into a flying motion, exploring the room from a seemingly impossible perspective before returning back to live action footage, grounding the audience again. 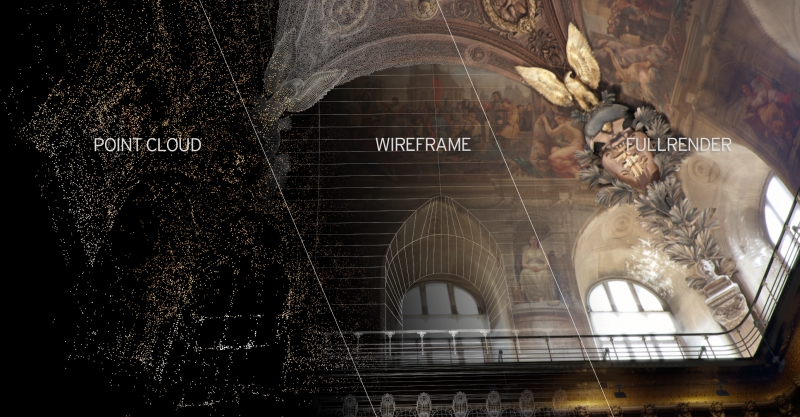 Francisco Lima, Gramercy Park’s VFX Technology Supervisor, says “The idea is to transition something which you know is captured from Steadicam and explore a space from a position that you know you wouldn’t be able to without blending between a real camera and CGI, but not seeing the transition hopefully leaves you in wonderment of what you just saw and how you saw it...”

The artists at Gramercy Park Studios made use of the latest technologies in image acquisition, geometry extraction, 3D modelling and digital paint that allowed the Director to have “free reign” over camera after acquisition, something which is key to his vision that required ultimately flexibility and so blend between the live action Steadicam shoot that dove tails the exhibit and the virtual environment within.

“In order to digitally construct the entire 360 atrium, the team created a pre-visualisation, developing low-resolution versions of six of The Louvre’s rooms. This enabled the Director to virtually navigate through the rooms and decide how best to shoot the project, allowing him to decide which camera rig would be used, the way the camera would move, the camera’s speed and to pinpoint which rooms were to be elaborated upon virtually”, Says Nuno Pereira Senior CG Supervisor. 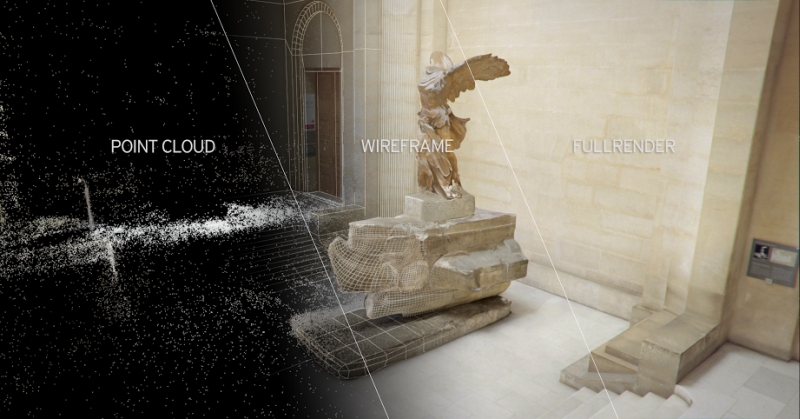 As always this stage was a hugely informative process and ultimately resulted in the decision to only showcase two of the six environments to maximise the “all immersive” desired artistic effect.

The Gramercy Park team visited the Louvre on multiple occasions in order to comprehensively survey all the rooms that Mark selected. They performed an extensive photographic capture of the rooms, gathering and abundance of images and measurements, and used a photogrammetry workflow, which allowed the team to extract the high-resolution textures and geometrics.

Hundreds of photos were calibrated within the virtual space to find, in 3D, the exact position that each photo was taken. Extracting a point cloud from these calibrations, which when then mapped with digital textures that had been carefully edited and enhanced, created 3D models.

The Director oversaw a live action shoot also supported on set by the Gramercy Park team, with the resulting footage then blended with the digital environment in order to create the seamless camera movement. The team recreated the live action camera movement digitally, resulting in a transparent blend between both environments, which portrayed an otherwise impossible voyage through the intricate spaces.

Ben Raven, Creative Director and Founder of Gramercy Park Studios says, “This was definitely a challenging and engaging project from both the artistic and technical point of view. The project has been a creative love affair for Gramercy Park Studios and we are very proud of the stunning, beautiful results that the team achieved. We have, as a company, also gained insightful New knowledge through working on this bespoke creative artistic project. This kind of knowledge can only be gained in a non-commercial production like this.”

Creating the installation was an intensely long process as thousands of frames had to be dealt with, and with such an extensive rendering time it meant that team couldn’t see the footage until the final QuickTime had been made.

Gramercy Park needed to develop an internal workflow that was time-efficient enough to be able to process the hundreds of thousands of mapped points into a point-cloud.

Their involvement in the project demonstrates their capabilities when constructing digital landscape, beginning a push from the company to increase the usage of digital environments in commercials.

The atrium with the Winged Victory of Samothrace, has since been decommissioned for refurbishment. The only place to see this exhibit today in its full glory is within this life like video installation.