The events in Avengers: Endgame have changed the world forever and Peter Parker / Spider-Man (Tom Holland) is struggling to come to terms with the fall out and loss of his friends. Directed by Jon Watts, Spider-Man: Far From Home sees Peter trying to shake off his super hero shackles and relish the chance to be a normal teenager. Whilst on a school trip to Europe he meets the charismatic Quentin Beck / fellow superhero Mysterio (Jake Gyllenhaal), but all is not what it seems…

Framestore took on the dazzling ‘Illusion Battle', a mesmerising sequence which sees Mysterio play on Peter’s very worst fears by conjuring psychedelic environments, freakish characters and a dramatic narrative. Working with production VFX supervisor Janek Sirrs, the team crafted the story and design of the sequence as well as creating the VFX. The abstract nature of the shots and constantly evolving designs meant that once the storyboard was finally locked, the team had just eight weeks to turn around the 140 shots needed to deliver the scene.

Framestore was in the unique position of being encouraged to come up with original and inventive ideas to show Mysterio’s menacing power play. VFX supervisor Alexis Wajsbrot, who has previously worked on Marvel Studios’ Doctor Strange and Thor: Ragnarok, jumped at the chance to be creatively involved in the sequence. The team began by brainstorming references from other films, creating storyboards and then concept artwork to put Spider-Man in various unsettling situations. 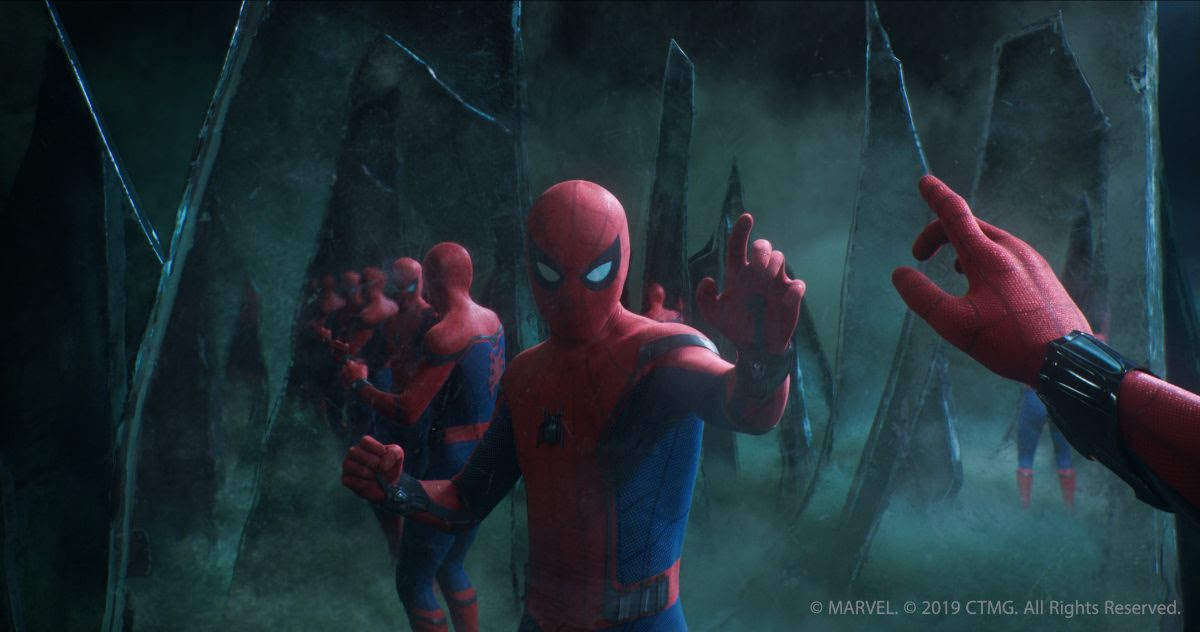 "It was a process to find the visual and aesthetic style," notes Opgenhaffen. "But once we got there we were able to generate ideas and sequences, almost like an animatic, which the client could absorb and then came back to us with their thoughts."

The team delivered ‘rapid prototypes’ to help communicate ideas with Janek and the team at Marvel Studios quickly for their feedback.

"We used all kinds of tricks," explains Alexis Wajsbrot, "We modelled as much as possible in 2D and using a 2.5d projection technique and as much stock footage as possible to turn around concepts efficiently."

The sequence begins with Peter visiting what he believes to be the S.H.I.E.L.D. office in Berlin but is actually a construction yard which has been augmented by Mysterio’s drones. Mysterio is a master of creating intricate real-time experiences using a sophisticated virtual reality set-up, an intriguing concept for Framestore to sink their teeth into considering their own history in designing immersive experiences. Peter is thrown into a series of conjured illusions aimed to panic him; a school hallway stretches endlessly into the dark, with horror movie-style flickering lights. A terrified MJ falls out of reach, from the top of a stylised Eiffel Tower. Spider-Man is pulled into a disorientating hyperlapse effect towards a miniature version of Aunt May’s house. Reflections of Spider-Man in shards of glass come alive and attack. Spider-Man and Mysterio engage in combat with a backdrop of the Valley of the Fallen; a graveyard with looming statues of the fallen heroes from Endgame. A zombified Iron Man pulls his way out of his grave with a head that’s half skull, half helmet. Spider-Man is trapped in a snow globe featuring the New York skyline, held by a giant Mysterio. Spider-Man moves seamlessly between the scenes, occasionally breaking back out into the real world before sinking even deeper into his nightmare. 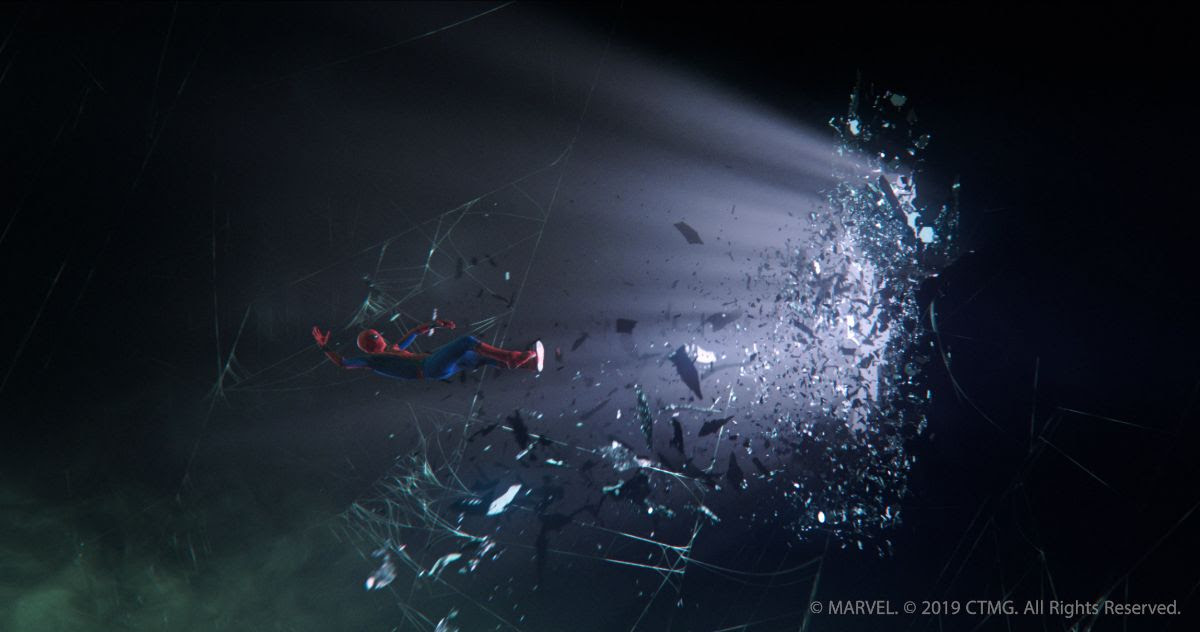 The design of the sequence was key; eerie green smoke, created by FX in Houdini, seeps into each environment which was further stylised to emphasise a feeling of unease.

"Things were slightly askew," says Opgenhaffen. "We made things look off-kilter, with a forced perspective."

Zombie Iron Man was also a design challenge, with the team concepting him from scratc."‘You can imagine how important it was to get this part of the sequence right," says Wajsbrot. "Tony Stark is a pivotal character within the Marvel Cinematic Universe, but also one who had an extremely tight bond with Peter Parker. We therefore needed to make sure he not only looked cool, but that there was also a real emotional tug to this part of the sequence."

The character needed to strike a balance between being scary, but not too sinister or gory. The Valley of the Fallen shots see Mysterio and Spider-Man engage in a battle; a complicated sequence featuring a crane from the real world punctuating the illusion. A team of in-house animators blocked the action with concepts before the VFX stage, which featured a lot of blast and destruction effects. "we had to completely create the environment and stage the action," says Wajsbrot. "It was great from an animator’s point of view, to be able to add or remove shots to make sure the beat was as punchy as possible." 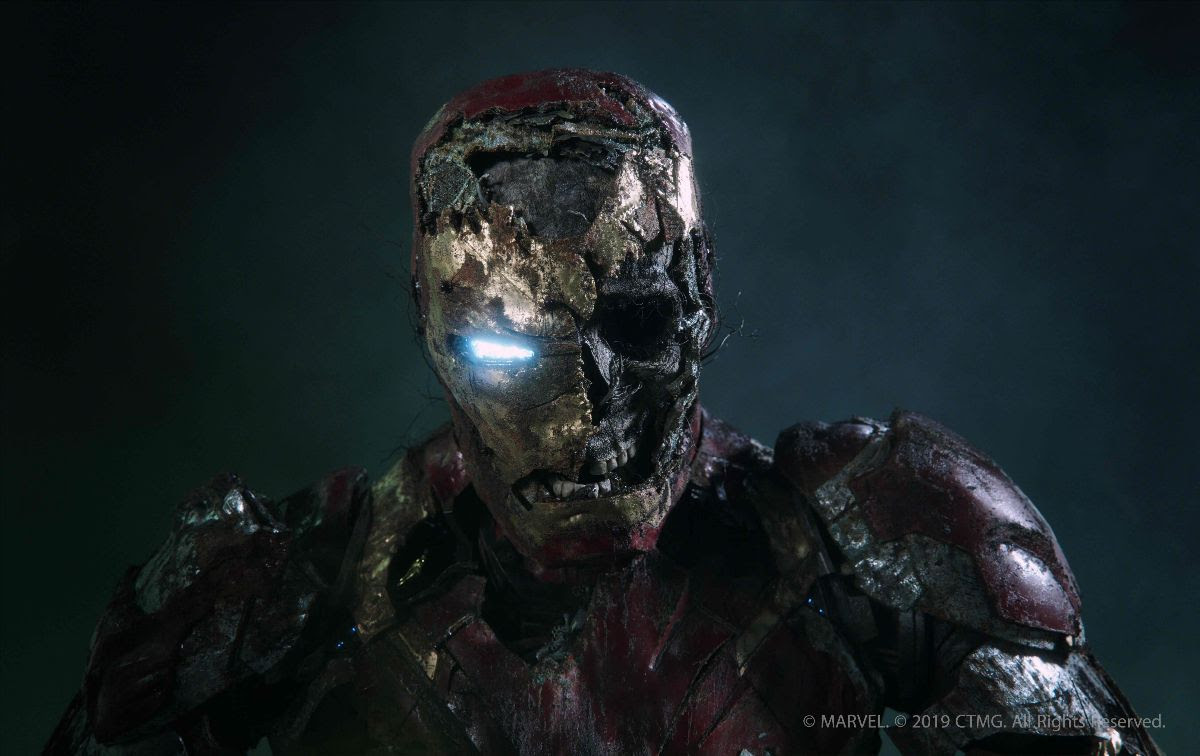 Whilst tackling the shots in the studio, Framestore was also able to come up with creative technical solutions for the production team shooting on set. While most shots were fully-CG, allowing for the team to create what was needed in the frame, some plates were required, often when talent was involved. One example was the Eiffel Tower sequence with MJ (Zendaya). The team blocked the animation ahead of the shoot, with a CG version of MJ. They pre-lit the scene, with precise lighting information for the position of the moon and the bright lights from the Eiffel Tower, and rendered it before passing to production. This meant that what was shot on-set was the very plate material needed by the team at Framestore. "It was a great example of how the VFX department can help to drive the shoot," explains Wajsbrot. "It couldn’t have been done with the time we had otherwise."

When Spider-Man breaks in and out of the illusionary world, we see a blue, twinkley, FX-driven transition dubbed the ‘B.A.R.F’ effect, which is based on the transition used by Iron Man in a scene from Marvel Studios’ Captain America: Civil War. Director John Watts wanted the illusions to reveal the real world in a creative way, so the transitions move slowly and reveal objects in the environment piece by piece. Framestore’s FX team helped to drive the voxelisation process in 3D before passing to the comp team to create the final look in Nuke.

Renowned for being an award-winning creative studio, Framestore relishes in tackling creative, artistic and technical challenges. Marvel Studios’ Spiderman: Far From Home presented a unique opportunity to build a stand-out sequence from scratch; working directly with the filmmakers to brainstorm ideas, work-up concepts to storyboard the action beats and deliver the final spell-binding VFX. "We are all really proud about the final result at Framestore," adds Wajsbrot. "Let's make all projects as creatively challenging and interesting as this one!" 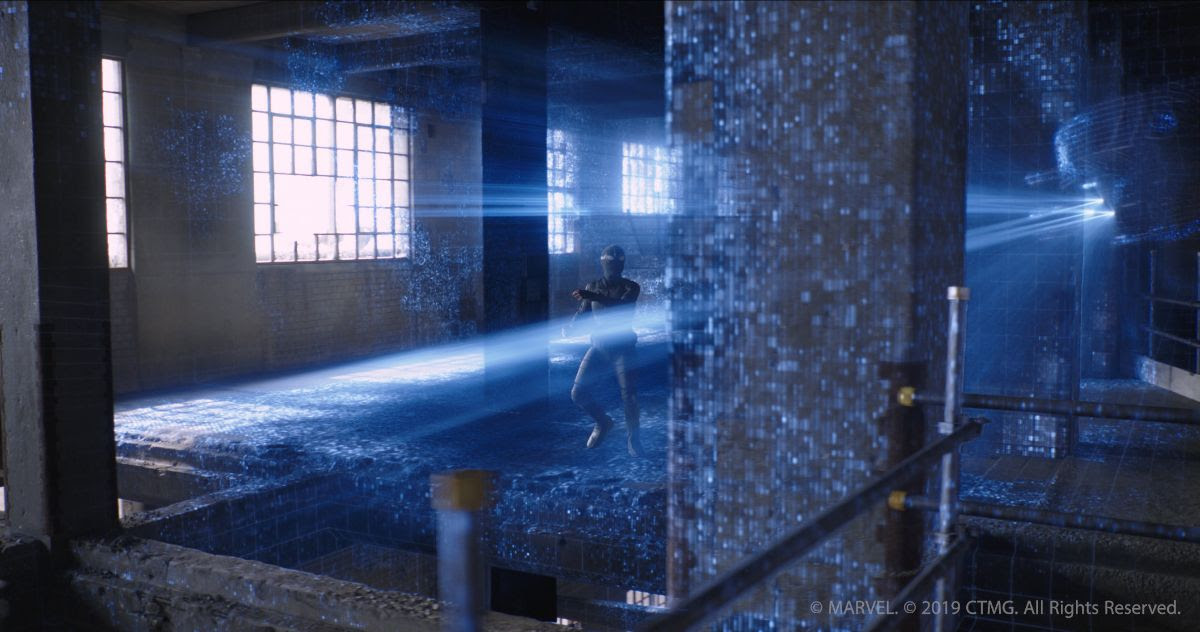