Carbon Academy Creative Students Reflect on their Adventures in Advertising

This week, M&C Saatchi will be celebrating the graduation of the first class of the Carbon Academy. They’ve been working with six young women from inner city schools, bringing them into the agency and mentoring them over the past ten months in a programme involving joint projects, networking and challenges.
The scheme was developed in collaboration with University of Greenwich who helped devise and launch the training scheme aimed at Year 12 females, and those identifying as female, from inner city schools.
The ambition of Carbon Academy is to get more young women, and from diverse backgrounds, into the creative industries by raising awareness and offering opportunities that might not otherwise appear open to them. As the Carbon crew prepare to graduate with a special ceremony at the agency’s Golden Square HQ, we caught up with two of the students, Olamide Taiwo and Nabilah Delowar, to find out what they made of their adventures in advertising and what the creative industries need to change.
LBB> What, if anything, were your impressions of advertising before you started the programme?
Olamide> As a media student I felt like advertising was an interesting career path, as you have to be creative in order to make your content stand out and battle for the attention of your audience. But I didn’t consider going into advertising at all.
Nabilah> Before the programme, I always thought of advertising as a way for other industries, such as the sport or the movie industry, to present their products to the world. I never thought of advertising as an industry on its own, but after being part of Carbon Academy, I realise there’s much more depth to the concept of advertising.
LBB> What was your first impression of the agency on your first day there?
Olamide> My first impression of the agency was that it seemed like a cool space and I loved how I saw adults who didn’t seem old - it would be ironic if they were. I love the organisation of each department; they are sectioned but not completely separate from each other which means people from different departments or sections within a department have the opportunity to interact with one another.
Nabilah> I absolutely loved the environment and the work ethic! We were shown around the agency and I immediately felt included. As a young adult, I didn’t have any idea of what the working field looked like and when, on our first day at M&C Saatchi, we (the mentees) were introduced to the team, it felt really home-y and calm.
LBB> What was your most memorable experience during the programme?
Olamide> My most memorable experience would have to be ‘An Ocean Of Air’ at the Saatchi Gallery. It was a VR experience - I really felt in touch with the Sequoia tree and it put me in touch with the childish and playful side of myself. It was really nice to experience that as it was so calming and relaxing. When it was over, I was extremely sad because it was like fresh air for me.
Nabilah> I really loved coming into the agency and shadowing my mentor as I was able to meet new people in the industry, bond more with my mentor and work directly with her. It was enlightening because everyone seemed energetic and continuously producing something. It made me feel very happy to be part of this programme! 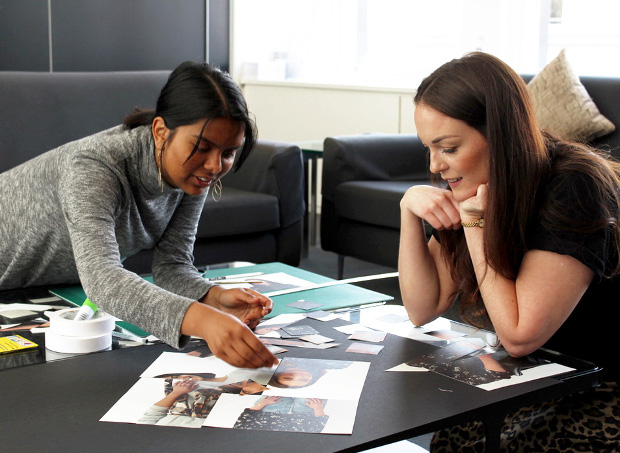 Nabilah and her mentor, Amy Westbrook, a creative in M&C Saatchi Sports & Entertainment.
LBB> And what do you think the people you worked with at M&C Saatchi learned from you?
Nabilah> I believe the team at M&C Saatchi might have learned perseverance from me. There were moments where I felt as if my projects were not good enough and I doubted myself, but with my mentor’s help I became more persistent in what I’m doing and presented my projects with confidence, without worrying about any flaws.
LBB> What projects did you work on that you're particularly proud of?
Olamide> I think my number one project would have to be the project that I am currently working on, my music project. I have taken a lot of time and put a lot into this project because music means so much to me and I am also a perfectionist. This whole process of making it is nerve-wracking but I cannot wait to see what the result will be and whether I will be happy with that result. I hope I will be.
Nabilah> My final project is the one I'm proudest about. Thinking big, I decided to make a short film on pollution and how the youth can come together to make a difference. For this particular project, I had to go out of my comfort zone as I needed the help of other people to make the short film happen. I wrote, produced and recorded it with the help of my friends. I plan on making more short films in the future!
LBB> How do you think the industry needs to change to make it more appealing to young women like yourself?
Olamide> I think it is truly about awareness and representation, if young women like myself are aware of careers out there that speak to their creative side, they will most likely add it to their options of things to pursue. Also, within the creative industry we tend to see men as directors, videographers, photographers and all those things. I believe more representation of women who have many different intersections such as their race, ethnicity, and sexuality will help in making it more appealing. I honestly believe that it is the fact that we are not aware of these possibilities, so we do not aim for them.
Nabilah> In my opinion, the industry needs to be more inclusive when it comes to young women and Carbon Academy is exactly the right path towards achieving this. More girls need to be informed of programmes such as this one through school, youth centres or advertisement online (perhaps Instagram or Snapchat). It’s a shame that not many girls are part of this industry, but it could be a positive thing for those looking to join – their ideas would be more appealing as they would be refreshing and diverse.
LBB> What are your ambitions - do you think the ad industry or creative industries might be for you?
Olamide> Honestly, I still do not know what I would like to do in the future but I do know that I would like to organise an advertising campaign, I believe I would enjoy that process so much. I do truly believe that the ad industry is creative.
Nabilah> Yes, I will definitely pursue a career in the creative industry. Currently, I’m taking theatre acting classes and someday I wish to perform in front of an audience. In the long term, I wish to write and direct my own plays and eventually get involved in filmmaking.

Invesco and LIDA Update the Old Masters for Brand Relaunch